The last week has been so uneventful in the garden that it hardly merits a post. But there were some developments worth a pic or two.

At long last, some carrots! 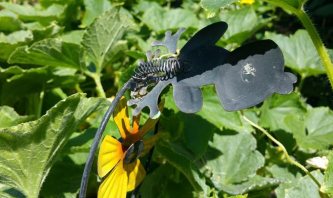 Dahlias living it up in the cucumber bed. 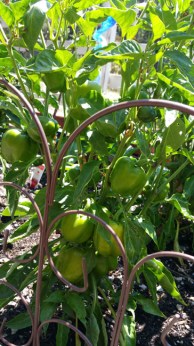 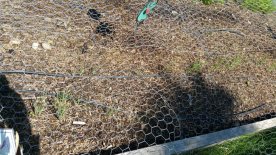 Onions still not showing up.

Looks like the pea bed will be pretty balanced after all. 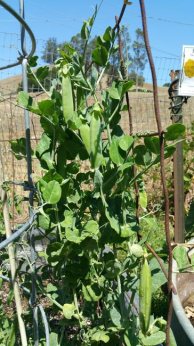 Peas in their pods.

The pumpkins sprawling out of the bed. 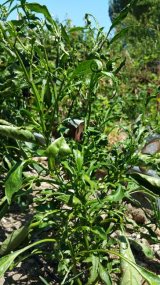 The sweet Italian pepper is not doing much of anything.

Yellow bell peppers on the way??

The prize for most productive goes to the lemon cucumber. I picked these and a few more today.

Volunteer zinnia in the cucumber bed, from last year’s planting.

What am I going to do with these pumpkins?

I leave the news on without paying much attention. When that ass comes on with his prime-time-interrupting televised self-congratulatory bullshit sessions, I hit the mute button. When some news report shows clips of him, I hit mute. I cannot listen to that sleazy half-wit any more. Still, trying to watch anything other than news is […]

(Originally published at Sports Radio Service) SAN JOSE — The San Jose Sharks shutout the Los Angeles Kings 2-0 at SAP Center Saturday night. It was Martin Jones’ 100th NHL win and the first time the Sharks shutout the Kings in San Jose in over a decade. Sharks goals were scored by Marcus Sorensen and Joe […]

Sharks Fall to Canucks 4-3 in Overtime; Gagner gamer puts Vancouver over the top

(Originally published at Sports Radio Service) The San Jose Sharks lost in 4-3 overtime to the Vancouver Canucks on Friday. Two Vancouver goals came from Markus Granlund, one from Brock Boeser, and the game winner from Sam Gagner. For the Sharks, Brent Burns scored twice and rookie Marcus Sorensen scored once. Jacob Markstrom made 34 saves […]

Sharks Come Back to Pick Up Point, Lose to Wild in OT 4-3

(Originally published at Sports Radio Service) SAN JOSE — The San Jose Sharks fell in overtime to the Minnesota Wild 4-3 at SAP Center on Sunday night. The point was hard won as the Sharks had to come back from a three goal deficit. Eric Staal scored twice for Minnesota, Ryan Murphy added another goal and […]

(Originally published at Sports Radio Service) SAN JOSE — The San Jose Sharks handed the Ottawa Senators a resounding defeat to the tune of 5-0 at SAP Center on Saturday night. The win followed up a surprising 5-4 overtime win over the Carolina Hurricanes on Thursday night, when the Sharks led a furious comeback after trailing […]