It is ironic that I am late to start blogging about the garden this season, since I started planting so much earlier. Actually, it makes perfect sense. I am feeling lazy. Not so lazy that I would not do a garden– I want to eat it, I just don’t want to spend so much time on it.

2015 garden on May 30. In the foreground, a volunteer plum tree that plopped itself down right in the middle of things. How can I say no to a plum tree?

I have been less organized: I still have not activated the drip system though almost everything has sprouted. I was more slipshod in my soil preparation, fertilizing in spots and sometimes not even tilling the whole box or making sure the fertilizer was mixed in. Still, I am having more success with the plants I started from seeds.  Maybe preparation is less important than water and timing.

By hand-watering, I spend more time looking at the plants and weeding. I may also be giving them more water, which is sort of a problem since elsewhere I am trying to save water. But lettuce needs what lettuce needs, and the lettuce is the most surprising success so far. I am not sure what kind of lettuce it is. The picture on the package looked like butter lettuce but it was an Italian seed company and I don’t think they call it the same thing we do in English:

Planted May 18, this is what they look like on May 30. Big improvement over last year.

I decided to give up on using netting to protect the seeds. Instead, I got the idea that maybe some garden ornaments would intimidate small birds. I have no idea if it worked but so far my crops have been undisturbed.

I left planting the lettuce until last, since it was such a disappointment last season. It took forever to start and when it did, it did not produce much. The only things I have changed are the above-mentioned flooding and I may have planted the seeds less deeply than last year. Whatever the reason, the 20 or so minutes I spend hand-watering the vegetable garden seems to be paying off.

The beets also seem to appreciate the individual attention and extra water. They have come right up in large numbers: 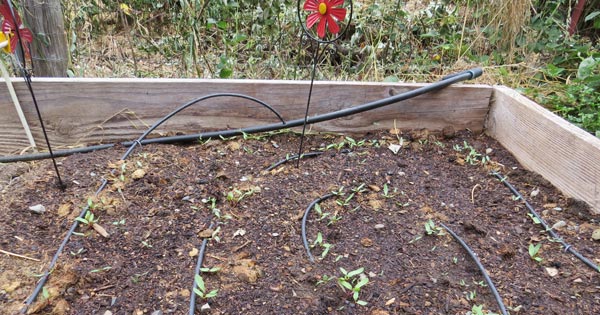 Planted May 16, the beets are also making good progress as of May 30.

Last year it seemed to me that we had a hard time keeping up with the zucchini. I had the two plants in the garden and a couple of volunteer plants in the back pasture that I watered with a bucket. Nevertheless, my mother requested more zucchini. So instead of last year’s four plants, we now have seven. I anticipate way too many zucchini.

In keeping with tradition, I am tending two volunteer zucchini plants, found again in the back pasture. Feeling lazy, I transplanted them instead of carrying buckets to them. They looked pretty awful after being ripped up and replanted but they have bounced back nicely:

I know, there are three plants there. One of them, the smallest, is an orphan that sprouted late in the Black Beauty bed. I did not have the heart to toss it out but I knew its elder siblings would quickly overwhelm it. Oddly, the zucchini were the hardest to start this season. I probably planted seeds three times before they finally took, but they did. Hence the straggler.

There are a few newcomers to the project this season. These were all purchased as plants instead of started from seeds, in keeping with my laziness. The first to go in the dirt were two yellow squash, planted May 1: 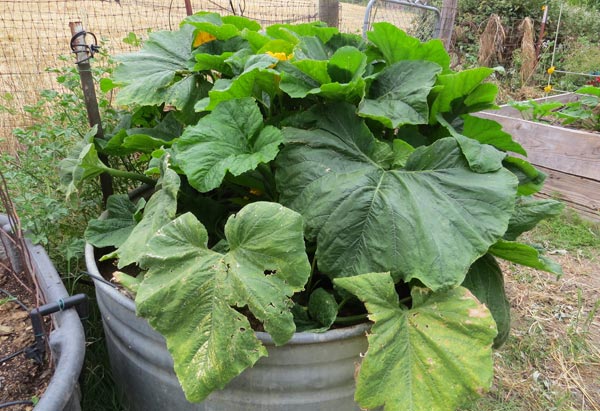 These two seem to love their planter. They have already produced a few edible bits.

Another request from Mom was for cucumbers. She selected two burpless cucumbers:

Transplanted May 10 in what was the flower bed last year.

She also brought me one lemon cucumber, which has taken the spot where the failed strawberries lived last year:

This year’s experiment is peppers. I grabbed a few at the feed store and put them in one of the melon planters from last year. They have not made much progress since I planted them on May 16. Too much water? Too little? Too much fertilizer? At least they haven’t shriveled up and died:

The only one of these that I recognize are the jalapenos. I hope they all fit once they get going.

I put peas back where they were last season. I might not have raved enough about how good the peas were but I enjoyed them very much once I started eating them. I have no idea if these are the same kind of peas since these came out of a plain white envelope I found in a drawer. Whatever sort of peas they are, they look pretty happy. They were planted on May 16:

Their sign has fallen off and blown away, probably into the blackberries.

As much as I enjoyed the cantaloupe I grew last year, the prospect of fending off sundry thieves and Labradors dissuaded me from planting those again. Instead, I went crazy with my other favorite from last year: the bell peppers. I think I might have planted too many but I have already lost one to a catastrophic stem injury so maybe more is better.

I tried to repeat the tomatoes from last year but when I looked for plants I could not find an Early Girl, so I planted a Better Boy and a Lemon Boy. A couple of weeks later I did find an Early Girl so we will see just how much time she can make up by being early. So far she seems to be keeping pace: 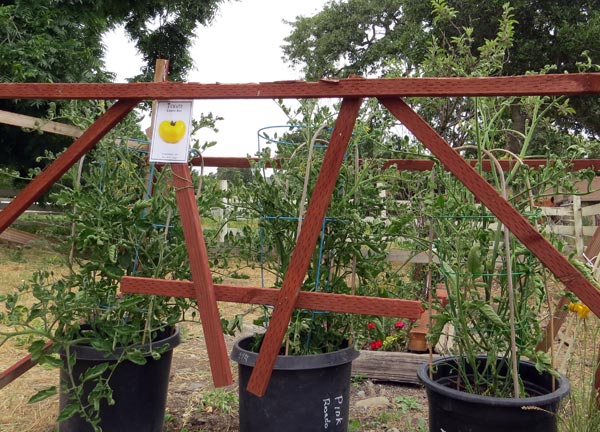 I also transplanted what I believe to be a pumpkin found in the back field: 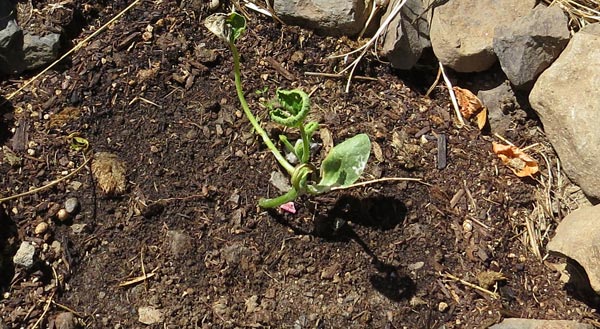 It still looks a little shocked, but I think it will make it. Whether or not it will make pumpkins is another story.

I base my belief that this is a pumpkin on the fact that it looks like a larger version of the Japanese pumpkins I planted last year. Also, I found it growing in a burn pile where I had thrown out last year’s Halloween pumpkins. I don’t think it is a stretch. I have been told that it might not produce fruit if it is the only one of its kind around. I am keeping an eye out for another, but for now the little guy is on his own.

My experience of the stay at home order has been mostly orderly. Once a week I go out to do some necessary work, and on my way home I make my weekly store stop. Sometimes it is the feed store, sometimes the grocery store, sometimes the hardware store. The change has been gradual as far […]

Suzy died. I don’t know how. All I know is that her trainer called and said she was found dead in her stall this morning. She finished her dinner and then died some time in the night. She was eleven years old. In her prime. A beautiful, well-built, beautiful moving mare. She was in training […]

Five new cases yesterday. Much better than the 16 we had on the 8th. A second death on the 10th. You wonder who it was. When you look at numbers like they have in New York and Italy, you wonder who has not died. But when the numbers are in the single digits, you wonder […] 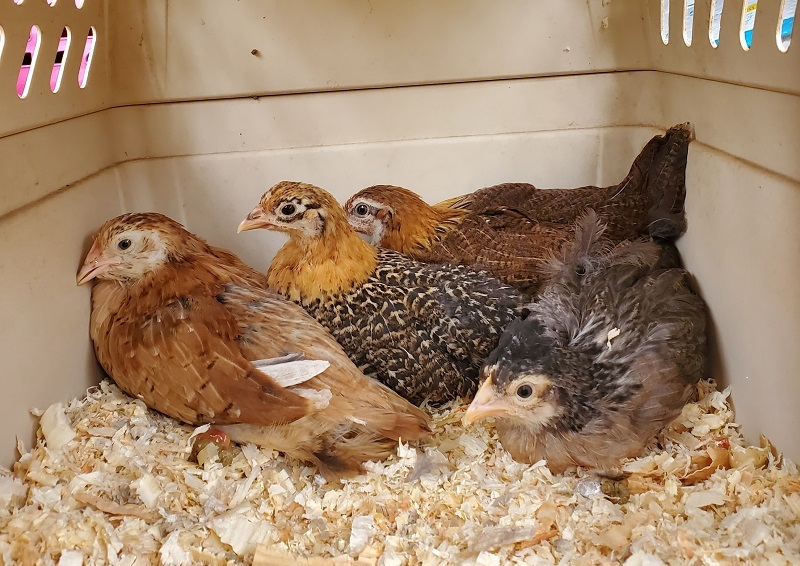 The chicken project seems to be working for me. I feel less aimlessly anxious. I still don’t find much on tv that is entertaining or holds my attention. I still let the tv show the news while I ignore it, but I am calmer. The county seems to be hanging in there. Our new cases […]

Why Won’t the Chicken Go in the Store?

Over 7,000 deaths in the US now. That is a lot more than yesterday. In our county there were ten new cases today but also seven more recoveries. We were stuck on thirteen recoveries for a long time, for six days. That’s a long time in pandemic time. National news says that our stay-at-home orders […]